Musings on my favorite reads…

The Best Kind of Dangerous 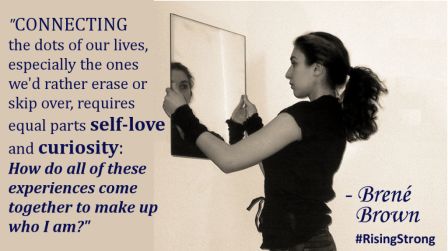 I don’t usually make New Year’s resolutions but this year I’ve decided to read (or listen to), at least one book per month.

I just finished listening to “Rising Strong” by Brene Brown. Listening to a book read by the author herself is a treat—I feel like I’m having a conversation with her. You may know Brene from her appearances on Oprah — taking about shame or from her Ted Talk on The Power of Vulnerability.

Anytime I hear Brene speak she gets my full attention. I think it’s her raw honesty that grabs me. She seems unafraid, but after listening to her you quickly learn that this isn’t true at all. She’s real just like you and me.

I found myself taking a lot of notes while listening to this book. Whatever I was doing while listening— I would stop, rush over and hit the pause button on my laptop, then jot down another brilliant quote she shared either from a poet, a song, her therapist or just from herself.

Here are a few that got my attention:

We are most dangerous when we feel powerless.

People aren’t themselves when they are scared.

We are imperfect vessels that hold the heart of someone.

“Music always makes me feel less alone in the mess.”

“We’re all just walking each other home.”_Rumi 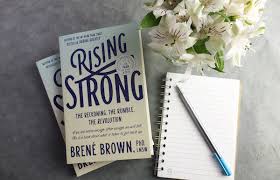 Brene says we are “hardwired for story”.  Everyone has a story which is important to share because it makes us vulnerable and it connects us with others. We learn best through storytelling. Brene considers herself a storyteller researcher.

She talks about her realization that we are all afraid. I had that epiphany four years ago—imagine if I’d had it sooner? How much pain could I have saved myself?  She talks about curiosity too and says that being curious makes us vulnerable because it involves uncertainty. “Curiosity is a shit starter; curiosity is unruly”.

She grabs me every time she quotes Teddy Roosevelt’s speech about daring greatly. He said:

“It is not the critic who counts; not the man who points out how the strong man stumbles, or where the doer of deeds could have done them better. The credit belongs to the man who is actually in the arena, whose face is marred by dust and sweat and blood; who strives valiantly; who errs, who comes short again and again, because there is no effort without error and shortcoming; but who does actually strive to do the deeds; who knows great enthusiasms, the great devotions; who spends himself in a worthy cause; who at the best knows in the end the triumph of high achievement, and who at the worst, if he fails, at least fails while daring greatly, so that his place shall never be with those cold and timid souls who neither know victory nor defeat.”

How does that make you feel? I know it makes me feel better about all the times I’ve stumbled, fell, bruised myself, but kept on going. In “Rising Strong” she says “people who don’t stay down when they fall are the best kind of dangerous.” This resonated with me.

So, how about you? Are you one of the dangerous ones— and are you rising strong? I bet you are. You’re reading this which means that at the very least—you’re curious. 🙂

’Till we meet again…